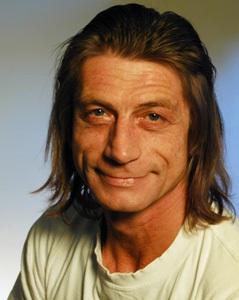 English artist Geoffrey Elder has exhibited internationally, including New York, before settling in Western Australia in 1980.

He has traveled widely, living in Asia for three years from 1968, journeying through India, Malaysia, Pakistan, Thailand and Bali. It was during this period that he first began to seriously paint. From Asia he moved to New York for four years, reveling in being a young artist in the art capital of the world.

Geoffrey is a self-taught artist whose style incorporates Surrealism and oriental mysticism His paintings are meticulously detailed, and embrace recurring universal themes, such as life and death, religion, music, love, and human rights. (Tibetan and Aboriginal rights are two recent themes).

His paintings are windows to other dimensions, stages on which other realities are played out, and are multi-layered with symbolism. Many are filled with hidden images that slowly reveal themselves to the viewer; cracks in a wall become the face of Jesus, a curlicue of ribbon reveals a woman’s profile, two dimensional space is twisted into impossible realities, missing floor tiles reveal a star studded sky, and tree trunks transmogrify into stage curtains.

Throughout all of his paintings music & the rhythm of life is present. Sometimes it is depicted literally, as in portraits of musicians, or symbolically with the presence of musical instruments. In others his flowing forms and colours undulate with the energy of music.

There are a series of Geoffrey’s paintings, inspired by eastern Mandala's.

They are psychedelic and kaleidoscopically beautiful; colours resonate, pulsate and spiral. The Mandala paintings are primarily based on Geoffrey’s interest in the Chaos Theory and eastern culture, yet also incorporate his love of music.